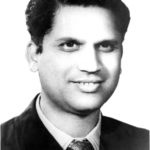 Late (Seth) Sampat Mal Lodha was the Managing Director of The Mewar Textile Mills Ltd., the first textile mill setup in 1939 of Bhilwara. He was a scion of the famous Lodha family of Ajmer, who were the Bankers of the Railways and the Government during British Rule. Born on 21.09.1938, he managed the Mewar Textile Mills for about 35 years, which he inheritated from his father, before its management was taken over by the State Government. He served as the Chairman of Rajasthan Textile Mills Association, the organisation setup by his late father, Seth Sobhag Mal Lodha in 1954, as the Chairman during 1972-1974. He was a well known industrialist, philanthropic, social worker and educationalist. He had kneen interest in the Indian Art & Culture and had a vast collection. He was a Philatelist, also. Mr. S.M. Lodha had started Vidhya Niketan, now a Sr. Secondary School, the first English Medium School at Bhilwara. He was the Chairman of Sthanakvasi Shravak Sangh, Ajmer till his death on 11.02.2006. The Lodhas had constructed several Dharamshalas, Schools & other buildings for the common people at several places in the country. They constructed the original building of Mahatma Gandhi Hospital at Bhilwara in 1952.