The pride and glory of Rajasthan, Chittorgarh echoes with the tales of romance and valor unique to the Rajput Tradition. This fortified settlement has been ravaged thrice and each time the outcome was 'Jauhar' - when women and children immolated themselves on a huge funeral pyre while men donned in saffron robes of martyrdom rode out of the fort towards a certain death.Alauddin Khilji was the first to sack Chittorgarh in 1303 A.D., overpowered by a passionate desire to possess the regal beauty, queen Padmini. Legend has it, that he saw her face in the reflection of a mirror and was struck by her mesmerising beauty. But the noble queen preferred death to dishonour and committed 'Jauhar'.

In 1533 A.D. during the rule of Bikramjeet, came the second attack from Bahadur Shah, the Sultan of Gujrat. Once again Jauhar was led by Rani Karnavati, a Bundi princess. Her infant son, Udai Singh fled to establish a new capital, Udaipur - a beautiful lake city, leaving behind Chittorgarh to be defended by two 16 year old heroes, Jaimal of Badnore and Fatta of Kelwa. These young men displayed true Rajput chivalry and died after 'Jauhar' was performed. Immediately thereafter Akbar razed the fort to a rubble. 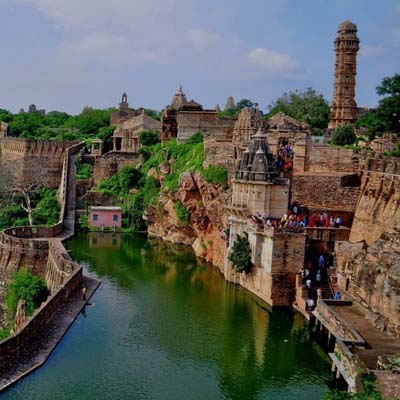 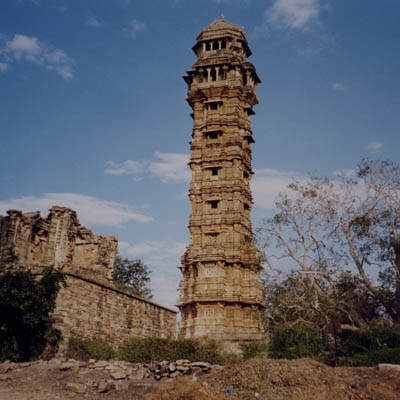 Fathe Prakash Palace Museum : Inside the historical Chittorgarh Fort, one big portion of the Fateh Prakash Palace was converted into a museum in 1968. It has a great collection of sculptures.

Vijay Stambh (Victory Tower): The imposing 37 metre high structure with nine storeys, covered with exquisite sculputres of Hindu deities and depicting episodes from the two great epics-Ramayana and Mahabharatha. It was built in 1440 A.D. by Maharana Kumbha, a powerful ruler of Mewar, to commemorate his victory over the Muslim rulers of Malwa and Gujarat.

Kirti Stambh (Tower of Fame): The 22 metres high tower by a wealthy jain merchant in the 12th century A.D. The tower is dedicated to Adinathji,the first of the Jain Tirthankar.

Rana Kumbha’s Palace: The ruined edifice of great historical and architectural interest, being the most massive monument in the fort of Chittorgarh.

Padmini’s Palace: Built beside a pool, the palace is a magnificent one. It was here that Rana Ratan Singh showed a glimpse of queen Padmini to Alauddin Khilji.

Kumbha Shyam Temple: Built during the region of Rana Kumbha in the Indo-Aryan style, the temple is associated with the mystic poetess Meerabai- an ardent Krishna deovtee. She was the wife of Prince Bhojraj.

Government Museum: The magnificent Fateh Prakash Mahal, presently a fine Museum with an exquisite example of sculputres from temples and buildings in the fort is worth a visit. Entry fee Rs. 2.00. Closed on Fridays.

Jaimal and Fatta Palaces: The ruins of palaces of Rathore Jaimal and Sisodia Fatta are witness to the gallantry of these great warriors.

Meerabai Temple:The temple where Meerabai worshipped Lord Krishna is built in north Indian style on a raised plinth with a conical roof and beautiful inner sanctum. An open colonnade around the sanctum has four small pavillions in each corner. 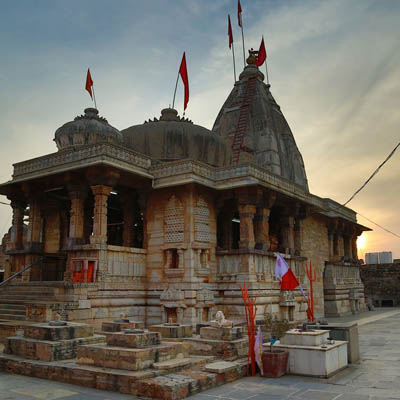